Learning and Play Centre for Disabled Children Gets Go Ahead

The approval was granted at a meeting of the council’s Planning and Development Control Committee on 14 March, and it is providing £6 million to create the new centre.

The centre, to be built on the school's riverside site in Fulham's Lysia Street is designed to be open throughout the week, including evenings and weekends. It will be designed as a hub for all local children with disabilities – a space for children to safely play, as well as a key support for parents in need of information and advice.

Plans include specialist provision for under-fives, play areas with accessible equipment, after-school clubs, health services and other support, training and meeting rooms and space for a wide range of activities.

Queen’s Manor Primary School's own support unit for pupils with special educational needs will also be rebuilt and landscaping will be carried out around the school as part of the project.

"This is a very exciting opportunity for all children at Queen’s Manor and for disabled children and their families across the borough," said headteacher Sonja Harrison.

"It will significantly improve the offer to all Queen’s Manor children now and in the future, and give a huge boost to H&F children with disabilities and their families."

"We want disabled children to have the best possible start in life and their families to have more support," said Cllr Sue Fennimore, H&F Cabinet Member for Social Inclusion.

"We worked with residents to design this centre with those goals in mind. In the current financial climate it was not easy to find such a large amount of money. But through tough negotiations with developers and cutting waste in the council we have been able to make this important investment."

The approved scheme, which would open early next year, will see a new single storey children's resource centre built within Queens Manor School, and the replacement of the existing special education needs, or SEN unit.

This would require the demolition and enlarged replacement of the existing single storey extension to the listed school building, which is currently used as the primary school’s SEN unit.

The approval also sees the repair and refurbishment of the existing listed boundary wall, including a new vehicular access gate from Queensmill Road for parking, as well as new landscaping and improvements to the school grounds. 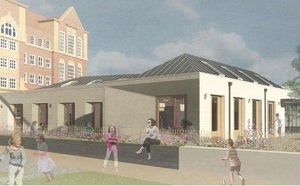 More details about the scheme and the council’s decision can be found here.