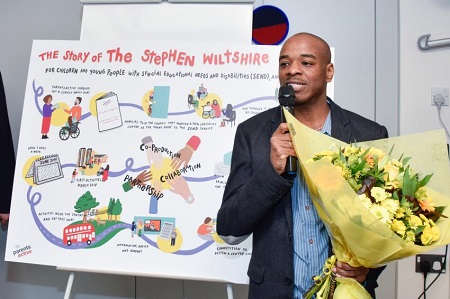 The £6 million Stephen Wiltshire Centre, next to Queen's Manor Primary School is a unique base where children and young and their families will be able to take part in activities and access information, advice and support.

The centre was opened by Stephen, a former pupil of Queensmill School, who has autism. His incredibly detailed cityscapes, drawn from memory, have amazed the art world since he first received media attention as a teenager in the 1980s.

At the opening event on Sunday, Stephen unveiled a storyboard capturing the journey from consultation with families through to the opening of the centre, which will permanently adorn the centre. It shows how families worked with H&F Council to turn this joint vision into a reality.

He also presented prizes to young people with special needs and disabilities who won an art competition themed around the launch, including Arvindh Ganesh, pictured below, who won the 16-25 category and Tia Diogo-Junior, pictured on the right, who won the 12-15 category.

The three winning pieces will inspire the creation of the centre’s new logo, in the coming months. 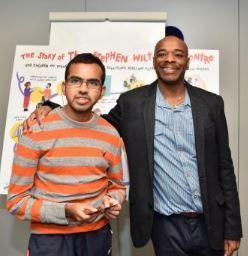 The opening was attended by the families who have helped create the centre; families new to the centre; the wider community; musicians; a magician, and players from Fulham Football Club – plus their mascot Billy the Badger.

Afterwards, Stephen released a statement on his official website saying: " Stephen is proud to have opened this brand new school on the 30th of September that was named after him, The Stephen Wiltshire Centre in Fulham, London. Lots of kids running around and many amazing peoole doing their hard work."

On H&F Council's website, former school nurse Marie Thomas gave a very personal insight into his connection with Queensmill School, saying: " Stephen`s journey started from Queensmill Primary School in Queens Manor building as a small unit with pupils from ILEA Divisions. With the expansion of the School it was relocated to Peterborough School building, at the start of H&F Education under Mrs C Watford and Cllr David Williams.

"The Chair of Governors at the time Mrs Hall and the previous Headteachers who are no longer with us supported Stephen on his venture with a trip to New York, his drawing amazed the world and he never looked back.

" It is amazing the new building was named after him where he started his rounded education at Queens Manor building.

" Well done Stephen,proud to have known you and your journey as the pass School Nurse of Queensmill Primary School."

Nandini Ganesh and Mary Melsom from Parentsactive, which supports parents and carers with children and young people with Special Educational Needs and Disabilities spoke at the event and have played a big part in the creation of the centre and informing the services and support within it.

"We felt very proud to have Stephen Wiltshire himself come and open the centre,” said Nandini. "It was a heartwarming event and quite an emotional day.

"We’ve been working in partnership with Hammersmith & Fulham Council and we’re really grateful to them. The centre means a lot to the families which use it."

Parentsactive will hold regular events at the Stephen Wiltshire Centre, including coffee mornings and a training session on "Mainstream schools and the SEN child" on Friday 12 October from 10am till midday. Parents can drop in for one to one chats and to receive support. For more information, email Nandini Ganesh at Nandini.Ganesh@hfmencap.org or visit Parentsactive.

"We believe strongly in this borough in doing nothing about Disabled people, without Disabled people – this is their centre, and families have been involved at every step of its creation," said Cllr Larry Culhane, H&F Cabinet Member for Children and Education.

"Stephen’s story shows what can be achieved when young people are encouraged to fulfill their potential – which is exactly what the Stephen Wiltshire Centre will seek to do every day.

"It was wonderful to have him officially open the centre which bears his name; and for families who have helped create this community resource to meet the man who has inspired it."