The woman who helped set up the Hammersmith & Fulham Foodbank over a decade ago has received the Freedom of the Borough.

Daphine Aikens started the operation to address the issue of poverty in west London.

Over its 12 years, the H&F Foodbank has helped more than 120,000 people and given out 1.4million meals. The supply of food and household essentials were dramatically scaled up during the Covid crisis and the operation remains critical due to the cost of living crisis.

When she opened H&F’s first foodbank in Fulham in 2010, there were only a handful of similar projects in the country. Today the UK has more than 2,200.

She now joins a select group of people (including a local military unit) who have been singled out for the honour to mark an exceptional contribution to the wellbeing of borough residents.

Daphine, 54, said she felt 'humbled' to receive the Freedom of the Borough, and accepted the honour on behalf of all the volunteers, funders, churches and helpers who have worked tirelessly behind the scenes to keep the foodbanks running.

“This means so much to me; I’m aware that it’s a rare honour. But at the same time, I’m aware that I’ve only done 12 years of service in the borough and there are people who have done so much more... so I don’t feel fully deserving of it,” she said.

“The Freedom of the Borough is really the icing on the cake,” added Daphine, who was made an MBE for her voluntary work.

“I’ve achieved nothing by myself – everything I’ve done has been part of a team. I’ve had the privilege of leading that team, whether it’s been paid staff, volunteers, funders, hosts including churches, partners... it’s been a joint community effort.” 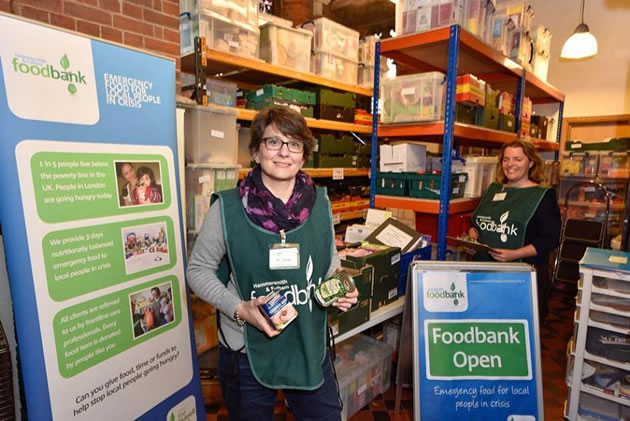 Daphine Aikens at one of the foodbanks she helped set up

She said that the current cost-of-living crisis, which has seen energy costs and food prices spiral, has made the Foodbank’s work even more urgent.

“I’m really sad to say that this is only the beginning,” she said. “The removal of the uplift in Universal Credit, the price rises, the increase in utility bills – this is a long-term problem that is going to require long-term solutions.”

In 2013, Daphine appeared on the Evening Standard’s Power 1,000 list of influential people in the capital. And in 2018 she won H&F’s Community Hero award for outstanding contribution to the life of the borough in our Civic Honours.

The local foodbanks still need help in terms of food donations, cash and volunteers, said Daphine, whose helpers in four centres in SW6, W12 and W14 operate what are effectively production lines of aid, channelling day-to-day essentials to those most in need.

H&F Council’s Leader, Cllr Stephen Cowan, made the presentation at a ceremony on Wednesday (25 May), in White City. The new H&F Mayor was also elected and Cabinet members confirmed.

Cllr Cowan says he is in no doubt that Daphine richly deserves receiving the most prestigious honour that the local authority can bestow.

He said, “At a time of such urgent need – through the pandemic and the cost-of-living emergency, specifically – she devoted her time to ensuring that local people in need were supported. In the past year alone, nearly 45,000 residents sought help from the Foodbank during the height of the pandemic.

“We’re grateful for all that Daphine has achieved in H&F, and it’s important that we show our gratitude by honouring her with the Freedom of the Borough.

“It is abhorrent that in the capital city of the fifth largest economy on Earth, so many people need to rely on charity to feed themselves and their families. But we’re so grateful to Daphine for everything she has done.”

Details of the locations and opening hours of the foodbanks, and the way to donate food, essentials and cash, can be found on the Hammersmith & Fulham Foodbank website.

In addition to Daphine, the Freedom of the Borough was also conferred on William Hunter, foster carer Hanora 'Nora' McCool and Frances Stainton for their service to residents over many years.